The main → Crimean legends, History, What is happening in Crimea → Amazon warriors in Crimea

The Kerch peninsula in Crimea is one of the most enigmatic and mysterious places. For hundreds of centuries, a relatively small area unfolded thousands of fights, tragedies, historically important events, for archaeologists and scientists alike. The Kerch area is more like a huge museum complex in the open air, where every year there are new discoveries. The Kerch city Museum of History and Archaeology, is the oldest museum in Crimea, it was founded in 1826 on 15 June. The museum has a unique exhibition of artefacts dating from VI century BC.

Even presence of the legendary warrior tribe the Amazons was discovered in Crimea. The fact is that the tribe of warrior women was living on the shores of the Black sea which in ancient times was called Pontus (believed IV — III century BC ) is amazing.

The blind poet Homer described the forces consisting of women who bravely fought against their neighbours, the Trojans, in his poems. Unlike Homer, ancient historian Herodotus avoids fabulous descriptions in his narratives for which he received the title of «Father of History» from the descendants. Herodotus mentioned in his treatises the Sarmatian people of the Northern Black Sea region as «run by women».

Herodotus first mentions Sarmatians in the story of the appearance of the Amazons in Scythia. It is fairly well known that the Amazons were defeated in the battle with the Greeks by the river Termodont (approximately in the V — IV century BC) and were taken prisoner and sent to Greece. But on the way they recaptured the ship and the wind and waves brought them to the coast of modern Azov sea near an ancient settlement (modern city of Taganrog, Russia).

Reaching the ground, they took possession of horses owned by the Scythians, and plundered the Scythian land. As a result, conflict broke out with the Scythians, who only then realized that they were fighting against women when they saw the dead bodies of the Amazons who died in the battle. Scythians stopped fighting and told the young members to go to Amazons settlement and with gifts of diplomacy to convince them to marry their men as they needed such strong and fearless women beside them. The legend tells that women agreed to live with their husbands only if they will leave other Scythians and go to the land near the Tanais (modern Don River area , Russia). It is believed, that this created the Sarmatian tribe.

The tribe of the Sarmatians appeared in the northern Black Sea region in the IV — III centuries BC. The new strong tribe ousting the Scythians, to Taurica (the ancient name for Crimea) Sarmatians came in  III — II centuries BC, endlessly  fighting with the Scythians and Bosporan Kingdom, also engaging with them in the military and political alliances.  Sarmatians, gradually settled on the Crimean peninsula, mixed with the local Greek-Scythian-Tauri population.

Amazon warriors in the past and now Sarmatian wives, fearless and strong women stuck to their ancient traditions. They hunted on horseback and participated in raids and wars alongside their men. They even dress like men!  Descendants of the Amazons were not allowed to marry until they kill three enemies.

One of antique authors Pseudo-Hippocrates (an anonymous writer, dubbed with the name because his works had been included in Hippocratic Corpus) wrote in his treatise «On the air, water and localities» about descendants of the Amazons he adds that after the marriage Sarmatian women would stop riding in the peace time. Besides this Pseudo-Hippocrates says that they do not have the right breast, because in the early childhood their mothers prepared daughters for their purpose they would place a brass instrument to fire and apply it to the right breast and burn, so that it loses its ability to grow, and all the power and abundance of juice goes in the right shoulder and arm. Many modern scholars believe that the Sarmatian tribe had matriarhat order of life.

Archaeological research in the area of ​​the Kerch peninsula, Crimea revealed almost a third of the female burials, had not only the usual feminine attributes but also weapons and harness. This confirms the evidence of ancient authors about the daily life of the descendants of the Amazons.

The sensation was the discovery on the Taman peninsula  in 1983 a stone bas-relief depicting the Amazons in battle. Images of Amazons were a fairly common story in the ancient world, but this was totally different. Firstly, the find was discovered in the area where the Amazons were believed to be living. Secondly, the bas-relief was created from the local stone — limestone. Thirdly, the relief is not depicting mythical warrior maidens as a popular theme works, but shows the certain, well known event — the battle of the Bosporus warriors and Amazons . The outcome of this battle, is not known, but that it really happened — no doubt!

Paintings of Amazons battles on ancient ceramics formed even a special «Kerch style». The collection of the ancient ceramics is well presented in the Kerch city Museum of History and Archaeology. 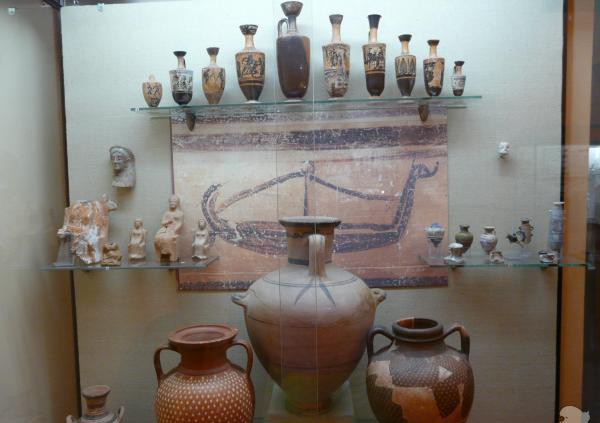 About 200 burial mounds exist in Kerch, Crimea and its immediate surroundings.

Tsarskiy Burial site (Royal burial site) is one of the most impressive sights in Kerch, the unique memorial of ritual architecture of the III — IV centuries ВС. The director of Kerch Museum of History and Archaeology archaeologist A. B. Ashik along with his team excavated it in 1837 and were captivated by its beauty, he called it the Tsarskiy Burial site. It was possibly the burial place of Bosporan king Paerisades II. The body was marked by signs of supreme power — a tunic woven of gold threads and a golden diadem — and thus he is thought to be one of the highest dignitaries of the Bosporus Kingdom. 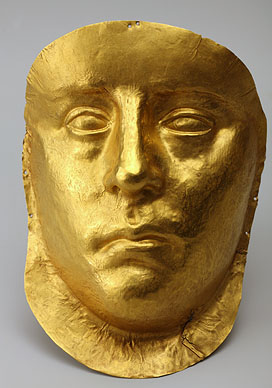 But archaeologists made ​​a startling discovery — it would seem there is a secondary compartment in the burial site; in the compartment lay a marble sarcophagus. In the marble sarcophagus lay the skeleton studded with precious things. Among them are the golden death mask with a very carefully transferred facial expression. The person in the picture mask literally was amazing and clearly marked with great power. A person with such expression must have been a leader or king, able to command people and preform heroic acts. As a confirmation of this the deceased was accompanied two silver dishes in the afterlife with inscriptions indicating that these things belong to the Bosporan king Riskuporidu II. But the discovered skeleton was female! Also archaeologists found clearly female sets of things and ornaments. 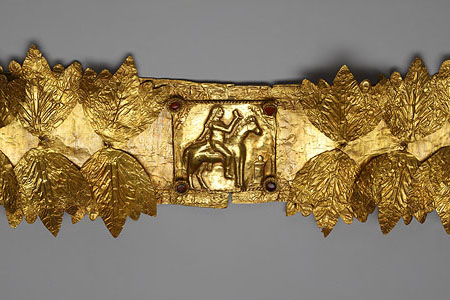 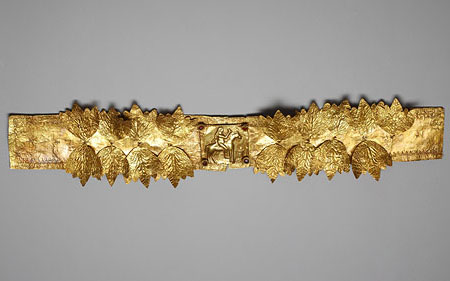 Along with a golden mask were found: a small gold bottle with a lid, ornate garnets, two wide bracelets, earrings in the form of amphorae, as well as several rings and about three hundred patches sewn on to clothing or fabric that covers the deceased. Also found was the remains of several necklaces and beads,  a simple bronze mirror and remnants of a golden spindle, a large number of silver and bronze vessels, including several pitchers, spoons, pots, buckets, ornate bas-reliefs, ladles, a large bronze basin. Notably the remains of two sets of patches of the horse’s reins which had images of Sarmatian tribal signs.  The most unusual about this burial not only mixed male and female things, but also they were different in time! Most of objects are dated III century BC but but other objects are dated IV century BC. Also everything in this burial site pointed to a strong haste in carrying out the rite of second burial. A. B. Ashik could not explain all the discrepancies found in the tomb…

The answer also lies on the surface. A closer look at the death mask — most likely belonged to the buried woman. Things in the mound is likely to have been paying off the gifts to the Amazons by Bosporans. It is believed the Amazon warriors did not have much time to bury the dead. So they couldn’t take her home for the appropriate burial, so they used the existing Royal burial site . This explains the haste of the burial and the presence of treasures from the Treasury of Bosporan king Paerisades II. Below you can see the reconstructed image of a golden mask owner from the famous Royal burial site.

Tzar Nicholas I was shown this incredible discoveries on his short visit to Kerch city in September 1837. He was very impressed by the golden mask and other findings and ordered to send the most valuable golden artefacts to St.Petersburg’s Winter Palace.

Our days you can see these precious findings in the Hermitage collection in St.Petersburg. But some of Royal burial site’s artefacts remained in Kerch city’s Museum of History and Archaeology and still keep the secrets of descendants of fearless and strong Amazon warriors.

Heading:   Crimean legends → History → What is happening in Crimea